Day 2 started with an anti-histamine tablet which seemed to solve the pollen problem, it was also a relatively easy day in terms of climbing. We rolled out of Bike Village and along through Bourg St Maurice and Seez up a valley to the village of Saint-Germain, stopping for ‘first lunch’ at a waterfall before the village.

From Saint-Germain we descended a straight and bumpy but fast, fun and not too technical path back to Bourg. After a coffee break in the town and ‘second lunch’ we all hopped into the van for uplift to Les Arc 1600 where the funicular station is. From the car park there we stopped for a snack break before we descended a trail known as ‘black-8’. 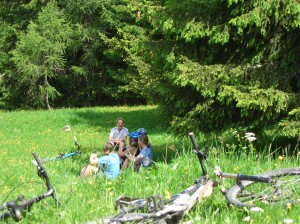 We divided into two groups for the descent and I chose the slower group, we gave the other group a head start and we waited a few times to re-group, however as we descended section after section of gorgeous rooty, pine needle carpeted paths with ride-able switchbacks (tricky enough to be interesting but easy enough to flow through) I found myself really into the flow of the trail. Before I knew it, I was at the bottom and had caught the ‘faster’ group! So we waited for the rest of my group and all pedaled back to Landry and Bike Village together.

That night a big storm moved in but only lasted ten minutes, we were still able to eat outside afterwards. In all a very gentle day in advance of a big day to come…

2 thoughts on “Fast and flowing downhill”