Sunday 2nd December dawned cold and frosty. It was the first (and shortest) of the Bowhill Winter off-road Duathlon series and my first ever Duathlon. I’ve done a few trail runs and a few mountain bike events so I thought I’d give this a go. 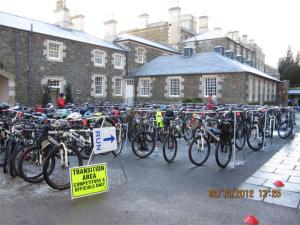 For this one in the series it was run first then bike. It was so icy though that the running leg was more of an ice skating leg, starting out on black ice on tarmac estate road. By the time we started climbing the track I was pretty near the back. I puffed and panted my way up the hill struggling with the underfoot conditions – it was so rough, one foot could be sunk into mud up to the ankle while the other is on solid ice and on the next step it could be the other way round, much of the run was off-piste through the forest without even a path to follow. On the way down the hill the ice got too much for me at one point where the road had flooded then frozen and I went flying!

I landed full body in the mud on a section where we passed from flooded and then iced-over road onto wet mud. Under the full-body mud-pack I felt my right hand stinging but didn’t really stop to think about it… Into transition I was third from last, pulled my gloves over my sore hand and my helmet on and was out again faster than anybody else…

On the bike I felt far better and started to reel in other competitors, I enjoyed the bike leg and in total I passed 12 people one by one by being able to stay on the bike the whole time despite having the wrong tyres on. I finished 123 out of 132 but looking at the bike times I was about another 20 places up the field in the bike part. After finishing I peeled off my gloves to reveal a huge slice up the inside of my wrist and onto the palm of my hand which took a LOT of very painful scrubbing to get the mud out of!

For some crazy reason I have already signed up to the next (medium) one in late January but that one is bike first so I will be more in the mix and between now and then I have plans to really practice my off-piste running.